Cell culture is used to understand how the cells in organisms (e.g. ourselves) work and respond to their environment, or fail during disease development. It is also used to identify what compounds could be new drugs for the treatment of diseases.

It basically consists of providing cells isolated from an organism with conditions to keep them alive and make them proliferate. Initially this was done by growing the cells on flat surfaces (2D) but with the realisation that their performance is limited, the focus has now shifted to growing them as clusters (organoids or spheroids) where they more closely mimic what occurs in vivo.

The emergence of 2D cell culture

Cell and tissue culture goes a long way back. In 1885 Roux showed that it was possible to grow embryonic chick cells in glass dishes (primary cells) by providing them with a growth medium (broth). In 1911 Carrel improved on this by using aseptic conditions and grew cells for long periods of time. He concluded that cells are immortal even if the host was not!
The real drive to develop cell culture as we know it today came in the early 1950s as a result of polio epidemics. Although poliomyelitis was first recognised by Heine in 1840 and the infectious agent identified as the poliovirus by Landsteiner in 1908, it was the increasing severity of the polio epidemics in major American cities in the 20th Century, that prompted a race to develop a vaccine (sound familiar?). The advances came ‘quickly’ from research teams led by numerous – now famous scientists : Gey isolated the HeLa cell line (1951) from a human cancer and used it to propagate poliovirus; Chaplin (no, not Charlie) discovered (1953) that glycerol could be used to freeze and thaw cells; Salk (1954) started to use phenol red as a pH indicator in cultures; Dulbecco (1954) introduced the use of trypsin for passaging cells; Eagle (1955) carried out a systematic analysis to define an excellent growth media (including serum as a source of growth factors); Meryman (1955) introduced using liquid nitrogen for long term storage of cells. And the idea of immortal normal cells was finally disproved by Hayflick in 1961.

Salk made his first vaccine using a dead virus and started testing in 1952, finally publishing his data in 1955. The first oral vaccine was developed by Sabine in 1957 and was licenced for use by 1962. Today – almost 60 years later, thanks to continued, global, intensive vaccination, polio is all but eradicated. It is an interesting question as to how long it will take to eradicate SARS-CoV2, having developed, licenced and started to inoculate its vaccine within 11 months instead of the 11 years needed for the polio vaccine.

So the focus of developing cell culture was to get cells to grow fast – and since HeLa cell line was permissive for poliovirus replication, everyone was happy.

Since then, many cell lines have been isolated and grown with either the same or similar conditions. Cell and tissue culture has been incredibly successful and used not only for the development of vaccines, but also for the development of antibiotics, understanding diseases and their treatment, genetics and inborn errors of metabolism, drug development (efficacy and toxicity) and many other facets of molecular biology. 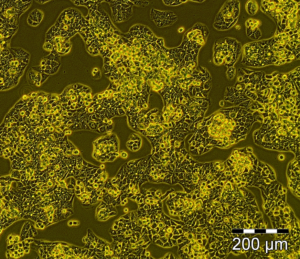 HepG2-C3A cells (10x) cultivated in a flat culture on a plastic surface of the t-75 culture flask. In this culture the cells are fast proliferating (doubling time <24h), they have lost polarisation and cell to cell communication is limited.

The limitations of 2D cell culture – why transition to 3D

As more and more data were collected, four main lines of evidence began to reveal that despite its huge successes 2D cell culture had significant limitations too. Firstly, it became clearer that cells grown in flat (2D) conditions did not reflect their activity in the host organism (for example cell lines grown in 2D cannot reliably be used for predictive toxicology). Secondly, data showed that the extracellular matrix (ECM, destroyed during trypsinisation-passaging of cells in 2D) was not just ‘glue’ to hold cells together, but also played key roles in directing cell activities and in intercellular communication (ECM dysfunction is involved in >40% of human diseases). The third revelation was the identification of stem cells (cells resident in tissues which have the potential to become terminally differentiated cells, and the realisation that most cancers develop from stem cells). And finally, stem cells in small biopsies were shown to be able to develop into organoids and partially replicate tissue function (as seen in cell diversification and migration in the brush border of the small intestine).

The common factor was the ability (or lack of it for cells to communicate) and this ushered in the era of culturing clusters of cells, either as spheroids (immortal cells) or organoids (stem cells or tissue pieces). Cultivating cells in 3D as Spheroids and organoids have emerged as a more physiologically relevant model for in vivo cellular responses. These more complex models improve upon cell-line and primary cell-based methods with their ability to mimic native cytoarchitecture and to display physiological attributes of the native tissue. However, they can be difficult to culture for long periods of time, while maintaining human in vivo physiological performance. In addition, they often have size and shape variability, and poor viability. 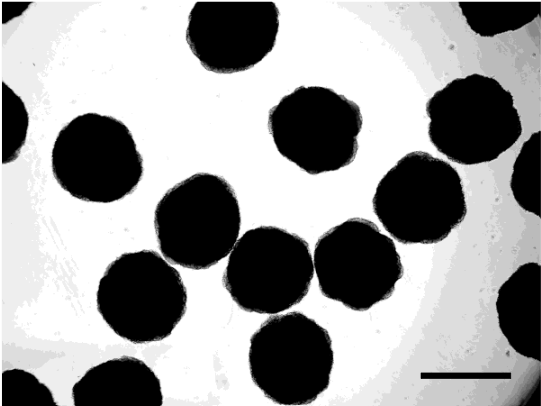 Microscopic image of a HEPG2 cell line cultivated with the CelVivo technology. This is a representative of what you can expect of cells cultivated as spheroids in the ClinoStar.

A schematic view comparing 2D cell culture, 3D cultivated organoids and spheroids with in vivo cells. Please note that these are generalisations and considerable variability is seen within some fields.